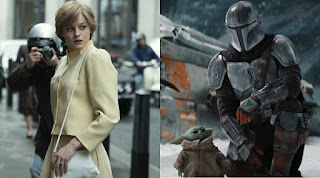 Some of the Emmy nominations announced yesterday actually look interesting this year.  I think there will be a race between THE CROWN, THE MANDALORIAN, and BRIDGERTON.

For comedy it’s TED LASSO all the way.  HACKS should get some wins, certainly for Jean Smart and hopefully Hannah Einbinder.  It seems stupid to me that actors on sketch shows like SNL are lumped in the same category as sitcom actors, but categories are such a joke these days that who cares?

At the end of the day, the shows that have gotten the most buzz, like QUEEN’S GAMBIT, MARE OF EASTTOWN, and POSE will likely receive some Emmy love.  And when I say “buzz” I mean LA because I suspect there’s been little or no buzz about any of these shows anywhere else in America.

Also nominated but now on the wrong side of the zeitgeist are THIS IS US, THE HANDMAID’S TALE, KOMINSKY METHOD (plus there’s the Chuck Lorre factor – the Academy hates his enormous success), and BLACK-ISH (and there are waaaay more deserving shows than the later years of BLACK-ISH).

As always, Colbert and Kimmell got nominated. Fallon did not.  The Academy got it right.

If your favorite drama isn’t recognized that’s probably because it’s from another country, you watched it on Netflix and were blown away, but it’s a three year old Danish series.  And yes, it is better than most of the series that did get nominated.

Best Comedy has now been reduced to which show made you laugh occasionally but was very pleasant over ten episodes.  We’ve come a long way since ALL IN THE FAMILY battled THE MARY TYLER MOORE SHOW and MASH.

And finally, with all award shows now, most people will not have heard of half of the shows that are nominated.  And a large portion of the population doesn’t subscribe to the platforms they’re on.  So expect national interest to be way lower than the NFL draft, or maybe even the MLB draft.

Congratulations to all the nominees.  Best of luck.  Offhand, I don’t know when the ceremony is on (I certainly won’t be reviewing it)  or who’s televising it.  All I know is it will be one of the major broadcast networks with very few nominations.