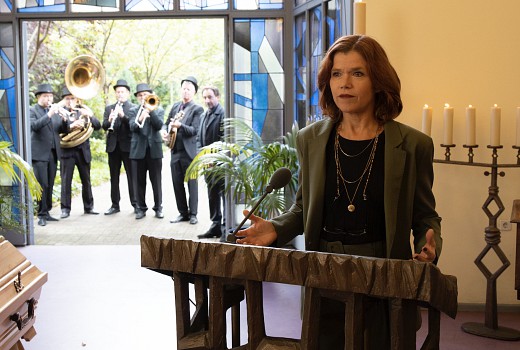 A comedy about funerals. Now?

Netflix is bravely premiering 6 part German comedy The Last Word which centres around a funeral eulogy speaker who loses faith in her work and tries to sabotage her husband’s funeral.

Death is a bleak affair, but do funerals have to be? When her husband suddenly dies after 25 years of marriage, Karla Fazius’ (Anke Engelke) world breaks apart. Unexpectedly and to the astonishment of her family, however, she finds new energy in a new calling: she becomes a professional eulogist.

On her way to regaining her own zest for life, she starts to accompany other mourners, making a great effort to break every single rule in the funeral business. Much to the regret of undertaker Andreas Borowski (Thorsten Merten). At the same time, however, she struggles to overcome her own loss, plunging her family deeper into chaos.

The 6 episodes tell different stories of mourning, death and moving on: Sometimes funny, sometimes sad and always a bit absurd. No matter what others say: death does not have the last word!