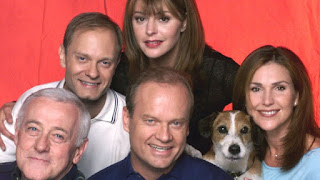 There was an article in the Atlantic by Megan Garber assigning much significance to “Maris jokes” in FRASIER.

Here is the article.

I read it and decided to respond by emailing her.  This is what I wrote:

As a contributing writer of FRASIER and author of some of those Maris jokes, I must say I quite enjoyed your article but respectfully feel you over-thought the significance of them. If there are reflections of society and veiled commentaries on ’90s era women in Maris jokes I can assure you they were not intentional. At least in my case. I’m not that deep. 🙂

I was not one of the creators or showrunners but my understanding was that they were simply jokes written at a time when America was less sensitive to offending any single viewer. If anything we wanted to clear the way for Niles to lust secretly after Daphne without the audience resenting him for it or feeling sorry for Maris. Beyond that, I for one was going for the laugh.

All that said, I’m so proud to have been a part of a 20 year-old sitcom that is still appreciated and discussed today. So in that regard, thanks again for your thoughtful article.

This was several weeks ago.  I was hoping she’d write back so I could include her response, but she never did.

What do you think?