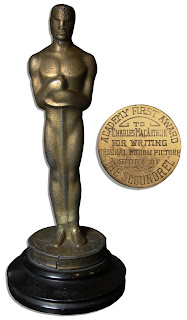 When I worked on MASH, each year we had our designated “Oscar” episode.  That was our worst show of the year.  MASH was on Monday nights, and at the time, so were the Oscars.  And even though we regularly got 30 million viewers a week, we felt we could hide it because the Oscars would obliterate us.   The point is, the Oscars were a huge deal, a Super Bowl-size deal.  The World Series got big numbers but didn’t come close.  I would say probably 50 million viewers for the Academy Awards was not a bad estimate.

Ah, but that was then.

Award shows have waned in popularity.  For the Oscars, they stopped awarding popular films (due to the fact that the popular films were all comic book movies, franchises, and “tent poles”), so the audience had no rooting interest.  Most people don’t see the movies that are nominated.  There aren’t the big stars anymore the way there used to be.  And it’s un-PC to make fun of dresses, appearance, anything.  So there goes that fun snark element of watching.

And now you have the pandemic.

This year the Golden Globes were down 62%, the SAG Awards down 52% (like I said, no larger-than-life Hollywood stars), and the Grammys dropped by 51%.

Good luck this Sunday to the Oscars.

Last year (do you even remember who won?) was the lowest watched Oscarcast ever.  It averaged only 23.6 million viewers.  Our MASH “Oscar show” probably beat that.  And if the pattern holds, and the Oscars drop another 50% — Jesus, JEOPARDY would whip its ass.

I believe the era of high rated award shows has come to an end.   Film studios are way more concerned with feeding their streaming services than Cineplexes.  Due to the pandemic, of the few people who have seen the contenders I bet 95% of them have watched them on TV or a device.  They had no choice.

Some claim that if a movie is primarily viewed on television it should qualify for an Emmy not an Oscar.  Yeah, except who makes the quality films, and small relationship films, and romantic comedies that used to be a mainstay at your local theater?  Netflix, HBO, streaming divisions of major conglomerates.  Warner Brothers is not going to bankroll romantic comedies.  Not today.  They’ll make WONDER WOMAN sequels until Gal Gadot looks stupid in the suit.

So for real movie fans, thank God for Netflix and other streamers.  Regardless of where they show them, they’re the only ones making interesting, small, edgy, thoughtful movies.   Are they worth “Oscars?”  The bigger question is: “Will Oscars even mean anything?”   If only 12 million people watch I’m not so sure.