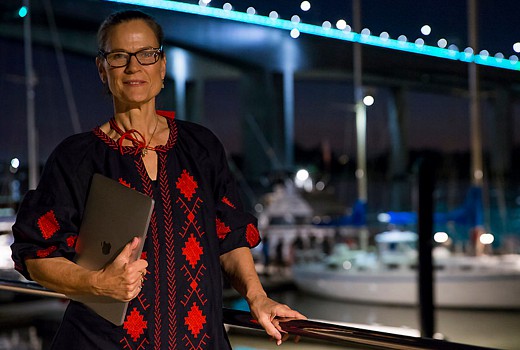 Screen Australia has announced the 11 creatives selected to travel to New York in April 2020 as part of the Talent USA: New York.

The delegation will attend the Australian International Screen Forum (13-16 April) where they take part in professional development and networking opportunities.

Screen Australia CEO, Graeme Mason said, “To achieve success in this global industry it is imperative we help Australian talent establish and foster creative and business relationships in the US – the largest English speaking market for screen content. This group were chosen because they are at the point in their careers where they can really take advantage of the opportunity and leverage these connections for their upcoming projects.”

Australian International Screen Forum Co-founder and Executive Director Michael Kelleher said, “We are excited to showcase the 2020 Talent USA delegation to a New York industry audience. As the demand for screen content continues to grow, these talented Australian creatives are in a prime position.”

Belinda Chayko: A writer, producer and director, Chayko was the showrunner and lead writer for the International Emmy Award-winning SBS mini-series Safe Harbour which screened on Hulu and BBC. She was also co-writer/story producer on ABC drama Stateless starring Cate Blanchett and Yvonne Strahovski, which will make its world premiere at Berlinale and will be broadcast in March 2020. A former journalist, Chayko co-created and co-wrote two seasons of the political thriller Secret City which screened on Foxtel and Netflix, and the ABC mini-series Barracuda. A recipient of numerous scriptwriting accolades, including AWGIES and AACTA Awards, she has also directed two feature films – Lou, starring John Hurt (which she also wrote) and City Loop. Both films screened internationally at major festivals, including Toronto and Busan. Chayko is currently developing a number of series and a feature film.

Vanessa Gazy: An award-winning writer, director and creator, Gazy completed her Masters in Directing at AFTRS in 2014, winning the school’s Kenneth B. Myer Award for Exceptional Talent. Gazy is currently developing her first feature Highway with Goalpost Pictures and Automatik (US). Her drama series Id is in development and was first developed through Endemol Shine’s ROAR: Smart for a Girl Gender Matters initiative. Gazy’s short films Foal, Highway and Shiloh have screened at over 30 film festivals internationally. Gazy is represented by Matt Rosen (Grandview LA) and WME.

Erin Good: A writer and director, Good created the hit Australian fantasy digital series Jade of Death which has amassed over 3.5 million views online. The series has been acquired by CBC and has won or been nominated for over 60 awards including; Best Drama Series from the International Academy of Web Television; Best Digital Series at the C21 International Drama Awards; and an Australian Directors’ Guild Award. Good is in development on a long-form adaptation of the series with support from Screen NSW. Her pilot script was shortlisted for the 2020 Sundance Episodic Lab. Good is also in development on neo-noir teen vertical series Red, feature film Please Help with co-writer Huna Amweero, the magic realism feature film A Lovely and Terrible Thing based on an award-winning Australian story of the same name, and the comedy/drama series Squatters with co-creator Chris Squadrito.

Mithila Gupta: A prolific screenwriter, Gupta has written on iconic Australian television series including Five Bedrooms, Doctor Doctor, The Heights and more. She wrote the pilot and several episodes of ABC teen series The Unlisted which screened on Netflix globally and was the assistant script editor on acclaimed ABC drama series Cleverman. Gupta endeavours to diversify the Australian screen industry and believes true inclusion starts on the page. She’s currently developing her own slate of projects aimed at a global market with a focus on India.

Alison James: James is an award-winning writer and director. Most recently she wrote and directed Judas Collar – a scripted, live-action short film. Judas Collar premiered at Sydney Film Festival with a Special Jury Mention for Best Director and went on to play at over 100 festival screenings, winning Best Narrative Short at the Austin Film Festival. James won the Australian Writers’ Guild Award for Best Short Film and was also nominated for an Australian Directors’ Guild Award and an AACTA. James has directed over 50 hours of internationally broadcast factual television. James is drawn to adventure and worked extensively in remote and punishing conditions while directing 24 episodes of Discovery’s Outback Truckers, filming alongside Australia’s toughest truck drivers. James is represented in the US by WME and Grandview.

Ben Lawrence: Lawrence is an award-winning writer/director working across feature film, feature documentary and factual TV. His recent credits include Ghosthunter, which won Sydney Film Festival’s award for Best Australian Documentary, and feature film Hearts and Bones starring Hugo Weaving – which had its international premiere at the 2019 Toronto International Film Festival. Lawrence has also directed factual series for the ABC, including Man Up and the 4 Corners investigative series, Exposed – The Case of Keli Lane. In 2019 he co-wrote and narrated a podcast based on his documentary Ghosthunter for Audible – which was voted in the top 5 podcasts by Rolling Stone magazine. With several solo exhibitions, his photography has been recognised at the International Photography Awards in New York, the Spider Awards for photojournalism in London and the Australian National Photographic Portrait Prize. Lawrence worked for over two decades as a TV commercial director. His work across all these mediums is distinguished by its examination of humanity and empathy.

Josephine Mackerras: Mackerras is a multi-award winning filmmaker who spent her childhood in Australia and China. Her first passion was acting, joining a theatre group at the age of nine. She left the southern hemisphere at 16, living in Jerusalem, Amsterdam, Montreal, London, Paris and New York where she studied filmmaking at New York University. She went on to make several shorts that were accepted in over 110 film festivals worldwide, including Slamdance, Cork, HOF, Rome, Stockholm, San Sebastian, Raindance, Edinburgh and AFI. Her first feature film Alice is currently being distributed and doing the festival circuit. It has won a string of awards including the Grand Jury Prize at SXSW.

Meg O’Connell: O’Connell is the AACTA Award-winning producer behind the critically acclaimed online series Robbie Hood from Since1788 Productions and Ludo Studio. She also produced Ludo Studio’s International Emmy Award-winning show Doodles for ABC ME and the vertical-video series Content for ABC iview. As executive producer on Content she oversaw all aspects of scripting, production and post on Australia’s first ever mobile phone show, which pop culture website Junkee listed as one of ‘The 50 Shows That Defined the Decade’. O’Connell worked as the development manager on the smash hit children’s animation Bluey, which is the most watched show in ABC iview history. The series won a Logie Award, was nominated for an International Emmy Award and is now screening worldwide on Disney+. Recently, O’Connell completed a creative mentorship at FremantleMedia in the UK, funded by Screen Queensland, and has since produced a music video for Columbia Records. She is currently developing a slate of projects with a number of next generation Australian creatives.

Stuart Page: Page is an acclaimed writer who co-created, script produced and was head writer for Blackfella Films’ hit ABC drama series Total Control, which won the 2019 AACTA Award for Best TV Drama. Total Control premiered at the 2019 Toronto International Film Festival under the title Black B*tch. His other TV credits include working as script producer and head writer for the second season of The Secret Daughter and The Doctor Blake Mysteries, as well as writing for Halifax, Cleverman, Janet King, Wentworth, Crownies, Neighbours, Home and Away and Blue Heelers. Page was a double nominee at the 2015 Australian Writers’ Guild Awards for scripts on The Doctor Blake Mysteries and Wentworth, taking home the award for Wentworth.

Claire Tonkin: Tonkin spent a decade as Drama Executive for Australian broadcaster Network Ten working across all scripted projects, including Offspring, Rush, Puberty Blues and Bikie Wars: Brothers In Arms. She was also Network Executive Producer for iconic serial Neighbours. An award-winning writer, Tonkin received an Australian Writers’ Guild Award for her short film Button and the International Emmy Awards’ Sir Peter Ustinov Scriptwriting Award for her pilot script Me & Mine. Tonkin joined production company CJZ as Head of Drama Development in 2017 and was named Head of Drama in 2019. Tonkin recently developed the 10-part drama series My Life Is Murder, for which she was also producer, writer and executive producer. Starring Lucy Lawless (Xena: Warrior Princess) the series premiered in Australia, the US and UK in 2019 and is now screening in over 50 countries.

Rodd Rathjen: Writer/director Rathjen first came to critical attention with his breakout short Tau Seru, which was selected to premiere at Cannes Film Festival in 2013 as part of Critics Week. It went on to win awards at top festivals around the world, including Melbourne International Film Festival. His feature debut, Buoyancy, premiered at the 2019 Berlin International Film Festival in Panorama, where it won the Ecumenical Jury Prize. Buoyancy was awarded a 2019 AACTA for Best Indie Film and an Asia Pacific Screen Award for Best Youth Feature Film. Rathjen is currently attached to direct Rizgari with Grant Hill (The Thin Red Line, Titanic) producing.