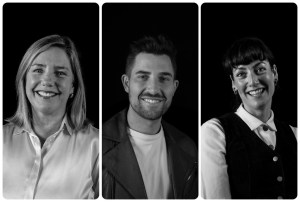 CEOs Marks and Fennessy said: “Leigh, Debbie and Emma are three of Australia’s most dynamic, trusted and admired non-scripted executive producers. They have an incredible track record of multi-genre success, and each brings a deep commitment to creating programs with integrity, authenticity and creative excellence. We’re proud to welcome them to Dreamchaser as executive producer partners as they launch the next phase of their careers. We can’t wait to share their programming with Australia and the world.”

Cuell said: “With the global explosion of demand for premium content, for me there’s never been a better time to create and produce original programs, and to launch my own Production label Sparkle Pictures in partnership with Dreamchaser. With Carl and Hugh’s combined industry expertise, and my creative and program making skills, I’m just so excited about the future and what we can produce together. Here’s to programs that make a difference to society, entertain audiences around the world, and win awards!”

Lamb said: “It is a true privilege to be given the opportunity to bring a fresh slate of compelling unscripted programming to life. I am thrilled to partner with the brilliant team at Dreamchaser to deliver new, internationally minded formats with a mischievous edge, that will capture the imagination of audiences worldwide.”

Aramberri said: “It’s an exciting time in television to be creating original content and I couldn’t be more thrilled to be doing that than with Carl and Hugh at Dreamchaser. It’s a dream itself to be part of a team that fosters such a large scope for creativity and I look forward to the quality of programming that it will bring.”

Endeavour-backed Dreamchaser will serve as EP on all projects.

Further producer partner announcements are due in the coming months.

Cuell joins Dreamchaser as Executive Producer, Partner: Documentary and Factual Entertainment, with more than 20 years’ experience specialising in factual and entertainment genres in Australian TV, public broadcasting and subscription TV. She previously executive produced the AACTA and International Emmy Award-winning ABC series Old People’s Home for 4 Year Olds and AACTA-nominee Ambulance Australia among many others during her tenure at Endemol Shine Australia. Her projects will be made by Dreamchaser and Cuell through her production company, Sparkle Pictures.

Aramberri has been a part of The Voice since its inception a decade ago, working as the show’s executive producer for the past seven seasons and helping to produce spin offs The Voice Kids and The Voice Generations. His multiple TV credits include Masterchef, Australia’s Next Top Model, The Apprentice, Project Runway, The Biggest Loser and The X Factor. He joins Dreamchaser as Executive Producer, Partner: Non-Scripted Entertainment.

Lamb was co-executive producer on Married At First Sight for four years and was instrumental in making it one of Australia’s most successful shows. She recently executive produced Netflix Australia’s first original unscripted series Byron Baes. Lamb will launch her production label Mischief Maker as an exclusive partnership with Dreamchaser in late July and serve as Executive Producer, Partner: Non-Scripted Entertainment.