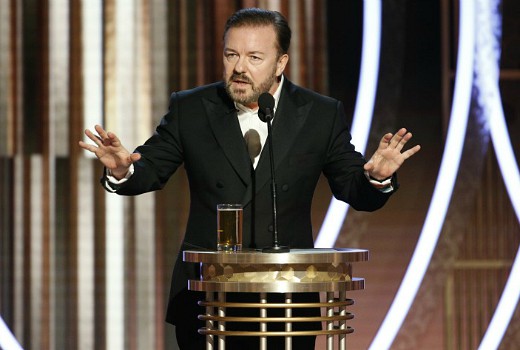 Succession, Chernobyl and Fleabag were big winners in the TV categories at the 77th Golden Globe Awards today. Each won two awards.

Russell Crowe won for The Loudest Voice, which became one of several moments to shout-out to Australia in the midst of bushfires.

Crowe was not in attendance. He sent a message advocating climate change action.

“Make no mistake, the tragedy unfolding in Australia is climate change based,” he said.

“We need to act based on science, move our global workforce to renewable energy and respect our planet for the unique and amazing place that it is. That way, we all have a future.”

Australian bushfires were mentioned several times, including by Ellen DeGeneres (it was the first acknowledgement she made), Cate Blanchett (calling out to volunteer firefighters), Patricia Arquette, Pierce Brosnan and a somewhat rambling Joaquin Phoenix.

But the night for the Hollywood Foreign Press Association began with host Ricky Gervais again delivering some brutal one-liners, noting it was his last hosting so he didn’t care anymore….