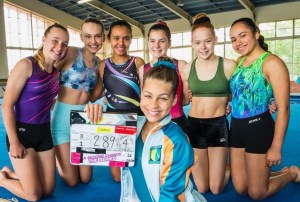 Upcoming Netflix YA series Gymnastics Academy: A Second Chance! held a test screening in Adelaide over the weekend for extras who had participated in crowd scenes.

Set in the world of teenage competitive gymnastics, the series is a TV spin-off from feature films A Second Chance (2011) and A Second Chance: Rivals! (2019), produced by Clay Glen.

The series centres around 14-year old Kyra Berry (Jada Lee Henry), an African American gymnast whose dream is to compete in the Olympics. When she injures her knee her USA Academy offers all withdraw. Maddy Cornell (Emily Morris), the ex-world champion Australian gymnast, now a coach, sees Kyra’s great potential and, having gone through her own injury dramas, invites her to join Australia’s Elite Gymnastics Program on a trial.

The 10-episode series is the first Netflix commissioned series in South Australia, outside of co-productions such as Pine Gap.

It will be released later in the year.