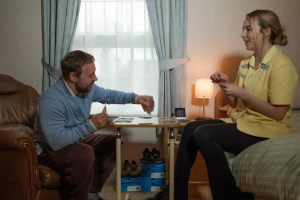 The British pandemic drama is set in a Liverpool care home and stars Comer as a carer who bonds with a patient, played by Graham, and is put to the test as the COVID-19 pandemic hits. It screened in Australia on ABC.

Dramedy series Sort Of, from Canada’s CBC and HBO Max and starring and co-created by Bilal Baig, won the program of the year prize.

“I have to say that when I first heard the name of the award, the phrase makes me think of something that a teacher would write a school report when they have nothing positive to say about the child,” Matafeo said jokingly when accepting her trophy.

Eagle Vision (Night Raiders) picked up the Innovative Producer Award and Showrunner of the Year went to Ashley Lyle, Bart Nickerson and Jonathan Lisco for their work on Yellowjackets.