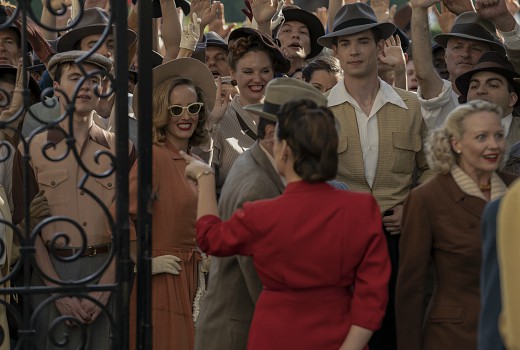 That’s the question posed by Ryan Murphy and Ian Brennan in their wonderful new series, Hollywood.

What if, during the Golden Years of Hollywood, life had been so much more socially progressive? What if it wasn’t all run by straight, white men? What if women, the black community and gays had been given equal access? What stories might have emerged on the silver screen and how would that have fundamentally changed America?

Behold a reimagined Tinseltown in this 7 episode fantasy, part-fiction, but partly inspired by suppressed, real stories.

At the heart of the series is a new movie script, Peg, to be made by Ace Studios. With his eye firmly on stardom is a hunky young farm boy from Missouri, Jack (David Coronswet). He loiters outside the studio gates in the hope of being cast as an extra -a first step on his quest for celluloid glory.

“Good lookin’ kid, no training. You’re a dime a dozen!” he is told.

But Ernie (Dylan McDermott), owner of the Golden Tip Gas Station, offers him a job pumping gas. Little does he realise he is expected to turn tricks as a gigolo whenever a cashed-up customer -male or female- drops the password, “I want to go to Dreamland.”

Jack gets resourceful after seconding black, gay screenwriter Archie (Jeremy Pope), who has written the script for Peg -the story of an aspiring black actress so disillusioned with the town she throws herself off the top of the Hollywood sign.

A tug-of-war ensues between conservatism and liberal thinking, but dotted along the roadside are hypocrisy, fear, and compromise. Creating an alternate history entails much sacrifice. Hollywood recreations Sunset Boulevarde, A Star is Born and Moviola were never like this.

David Coronswet is dazzlingly endearing as the aspiring movie star, whose dreams come at considerable cost. He is aptly matched by Jeremy Pope as the talented screenwriter who represents the voice of change. Amongst a rich cast are some supporting players who will surely attract attention come awards season: Joe Mantello as the executive ready to take a risk, Patti LuPone as the wife facing grand decisions, and Jim Parsons in the most detestable role of his career as a power-hungry, abusive agent.

Visually Hollywood is quite magnificent, with gleaming art-deco sets and costumes filling every corner of the screen. With its swingin’ soundtrack, this makes for a helluva seductive ride through a town where box office receipts rule over principles.

According to the filmmakers, such fear and power still reigns supreme in Tinseltown. What makes it so scary, is that they are in a position to know. Who wants to go to Dreamland, now?

Hollywood screens from today on Netflix.