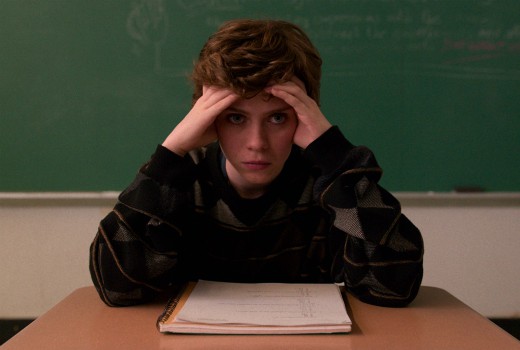 I Am Not Okay With This is your next binge-worthy young adult drama.

At just 7 half hour episodes you’ll want to plough through this tale which fuses coming-of-age with supernatural -should we expect anything less of the producers of The End of the F***ing World & Stranger Things?

Sydney lives with her mom Maggie (Kathleen Rose Perkins) and younger brother Liam (Aidan Wojtak-Hissong), all of whom are 12 months on from the death of their father / husband.

School is especially dullsville, aside from her best friend Dina (Sofia Bryant) whose time is compromised when she starts dating school jock Brad (Richard Ellis).

So introspective is Sydney that a teacher encourages her to pen her thoughts in a diary -which serves as the series narration. But she’s not even enthused about that directive either.

Yes there are deep-seated self-esteem problems going on here, all part of puberty, budding sexuality, and especially family life.

“I’m not special… and I’m ok with with that,” Sydney explains.

“People I love don’t love me back.”

But there is also her distinctive friendship with the very odd Stanley (Wyatt Oleff), a classmate who has a fondness for the ’80s and living by his own quirky rulebook. Sydney and Stanley forge a relationship that blossoms out of their alone-ness and will be tested in unexpected ways.

Without getting into spoiler territory, Sydney will come to discover she has special powers that are uncontrollable… a secret she struggles to comprehend. Navigating her teen years is complex enough without this kind of burden.

Sophia Lillis is pitch perfect as the plaintive, anarchic Sydney, delivering a beautifully underplayed performance. Wyatt Oleff brings spontaneity and spark to the piece while Kathleen Rose Perkins from Episodes & You’re The Worst is especially versatile as her harried single mother.

Supernatural elements are not often found alongside such naturalism but that’s what makes this all the more interesting. And as Sydney tries to comprehend what it all means, viewers will be similarly intrigued by it all.

There are also occasional nods to retro and pop culture, including The Breakfast Club and Carrie, but it isn’t as overt as in Stranger Things.

Co-Creator, Director / Executive Producer Jonathan Entwistle delivers a smart and engaging tale for Young Adults (and even a few not-so-young). Can’t wait to see where this goes…

I Am Not Okay With This premieres Wednesday February 26th on Netflix.