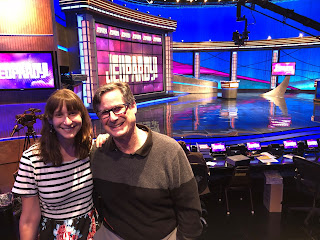 In light of my recent tribute last to Gene Reynolds and how much he meant to me, I received this FQ and thought now would be a good time to share it.

I have two great kids. My daughter Annie and her husband Jon are co-executive producers of THE UPSHAWS, the new Wanda Sykes multi-cam coming to Netflix soon, and I don’t know what my son, Matt does at Apple Computers in Cupertino, but he manages a team that’s making the next… something.

With that as background:

I guess it shouldn’t come as a shock that I have many of the same influences as my dad. He (and my mom) did raise me and all. The TV shows that probably influenced me the most are The Honeymooners, Cheers, Frasier, The Mary Tyler Moore Show, and Golden Girls. I have always loved and admired the work of Neil Simon, Carol Burnett, Larry Gelbart, Alan Ball, Christopher Guest, William Goldman, J.D. Salinger and John Kennedy Toole.

When we were starting out, Jon (my husband/partner) introduced me to Jane Espenson’s blog; I read it every day and have gained so much from her expertise. Jon and I credit our careers to Dan Staley and Howard Gould. Not just because they gave us our first jobs, but for what they taught us while we were working for them. Lastly, my dad has always been my biggest influence. (Not just because this is his blog and I feel like I have to say nice things.) I never thought I had enough talent to be a professional writer, and my dad was the one who told me I was wrong. I’m really glad I listened to him.

Thanks Annie. That means a lot. Hey, I’m just glad my influence didn’t completely screw you up. Same for your brother.
Source: Ken Levine