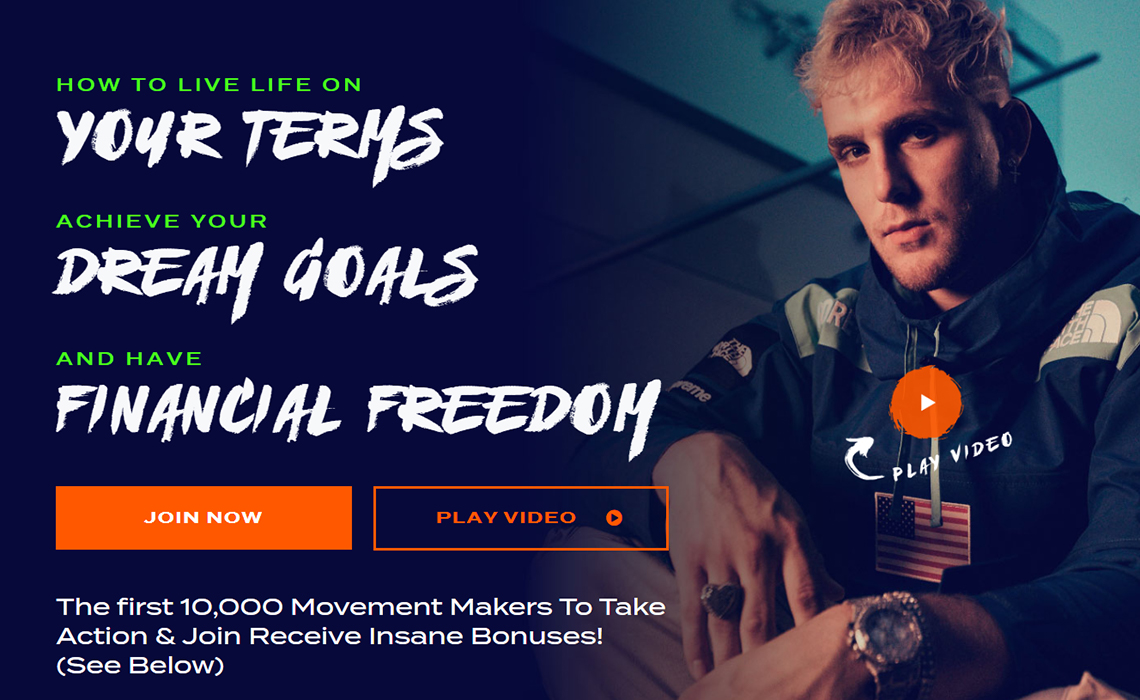 Jake Paul is bringing back Edfluence.

This past weekend, the YouTuber (whose channel boasts 19 million subscribers and between 25 and 50 million views per month) held a splashy Los Angeles launch for the Financial Freedom Movement (FFM), his new platform designed to teach kids how to establish an online presence–and monetize it.

Access to FFM costs $19.99 per month, and Paul told Variety there’s no set curriculum. But on its website, FFM promises to dole out “Jake Paul’s personal experience, rituals and secret formula” and offer access to “cutting edge mentorship, coaching, and training from multiple millionaires, expert trainers and thought leaders on how to achieve financial freedom using social media and the internet.” It also says members will get weekly video coaching calls with Paul “and guest expert trainers, influencers and thought leaders hand-selected by Jake himself.”

Some of the guests listed include Dan Fleyshman (founder of Who’s Your Daddy energy drinks; his FFM-listed qualification is “spent over $60M on influencer marketing”), Billy Gene (“ads have been seen over 600M times”), and Cole A. Hatter (“sold over $150M; expert on sales & real estate”).

FFM’s website also advertises the $19.99 price as a discount from $40, hinting at a possible future price increase, and says the first 10,000 “movement makers” to join receive “insane bonuses.”

FFM sounds a whole lot like Edfluence, the project Paul quietly launched in early 2018. Similar to FFM, it was meant to teach Paul’s primarily young audience members how to “change the world,” “make a dent in the universe,” and earn cold hard cash by becoming YouTubers just like him. Those interested could purchase a set of starter videos for $7; the full program cost an additional $57. (Its website appears to have been shut down a couple of weeks ago.)

With FFM, Paul has brought in a business partner–GenZ Holdings Inc., which bills itself as “a collection of high-visibility consumer brands and media properties designed for the Millennial and GenZ demographics”– and tweaked the messaging a bit. In social media posts teasing the launch, he lamented how “our education system is worthless,” and is “teaching kids 0 real life skills for them to secure there own future” (sic). During the intro event–held at Hollywood Sports Park in southeast L.A. County–he explained to the audience of around 50 teen and tween fans that he was disinterested in traditional school. He dropped out of high school after 11th grade and finished his diploma online.

“I just got the answers from a cheat site and put it in and didn’t have to do any work,” he said, noting that he thinks other unenthusiastic students probably do the same thing.

FFM is supposed to be the answer for those unenthusiastic students because apparent experts are teaching them skills they’re actually interested in. “Why are kids sitting in ‘film’ class learning from a teacher who has never even made a film??” Paul wrote in promo posts. “I was the kid in class who was the smartest but wouldn’t apply myself because I thought it was so stupid to be sitting there.”

Signs put up at the launch event echoed Paul’s sentiments: “I learned the periodic table but not how to do my taxes. Not awesome!” “Pi = 3.14 but how do I start a renters lease” (sic). “School sucks start a YouTube channel today.”

Kids at the launch had a meet-and-greet with Paul (and influencer friends of his, according to Variety, although none were named), were able to buy FFM merch, and were showered with dollar bills fired from “cash cannons.”

our education system is worthless

if I die i want to die having made a REAL difference on the world pic.twitter.com/sS0KYN9jcy

FFM’s website does caution that the platform is not for people “looking for a magic pill to success” because “there isn’t one.” It’s also not for people “who want a ‘get rich quick’ plan” because “this is about long term wealth and freedom.” And it’s also not for “people who believe education requires massive debt and countless years of outdated education taught by people who don’t have the results you want.”

Asked at the launch whether FFM’s marketing sends a dangerous message to young fans, Paul said he doesn’t necessarily expect FFM subscribers to drop out of school like he did. To parents, he added, “I would say why would you ever stop your kid from learning anything that is going to make he or she smarter? That sounds terrible.”