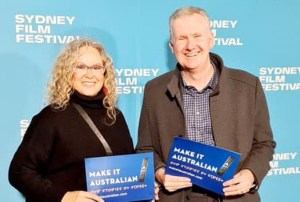 Leading Australian actors, directors, writers, producers and crew joined together last night for the national re-launch of the Make it Australian campaign at the Sydney Film Festival Hub in Sydney Town Hall.

The event underpinned the importance of keeping Australian stories on our screens, championing our unique culture and asking the government to recognise the value of our creative economy and independent production culture. New commercials will run at screenings during the Sydney Film Festival and on other platforms in the months ahead to support the campaign.

Officially launching the campaign, Leah Purcell said: “My career was built from Australian content… Our industry does give back to our nation tenfold – financially, culturally and personally in who we are as a nation. Our stories, especially our First Nation’s stories are our identity.”

In a call to action, Director Gillian Armstrong said: “We have developed many of the world’s best cinematographers, designers, directors, writers, composers, editors and of course actors.

“We have proved we can create good work, we have enormously committed talent in all areas and yet we are producing less,” she said.

Make it Australian is focused on ensuring that global streaming platforms like Netflix and Disney+ have some minimum investment levels of Australian content and that all platforms that supply content to Australians improve their support for Australian children’s, drama and documentary content.

The industry is proposing that the major streaming platforms should be required to spend 20% of their local revenue on new Australian drama, documentary and children’s content and that fair ‘terms of trade’ be instituted to enable the development of local IP.

“A requirement of 20% follows similar precedents set in other territories for streaming platforms. It would create up to 10,000 ongoing new local jobs and would unleash the potential of the local industry, which would, over time, double in size,” said Matthew Deaner, CEO of Screen Producers Australia.

“This proposal would create a wealth of new Australian stories, delivered to audiences on the platforms they are using every day,” said Claire Pullen, Executive Director of the Australian Writers’ Guild.

“Governments over many decades have recognised our need to experience our own stories told in our own voices, whether it’s on TV or at the movies. With streaming platforms such as Netflix, Stan and Disney+ notching up 16 million Australian subscriptions, the time is right to ensure Australians can see their stories on those platforms too,” said Alaric McAusland, CEO of the Australian Directors’ Guild.

“Having made drastic cuts to Australian drama, kids and documentary content on commercial free-to-air television, there is an urgent need to reverse the damage from the previous government to avoid a contraction in the local screen sector,” said Paul Murphy, CEO of the Media, Entertainment and Arts Alliance

“We need the Government to ensure that our stories are thriving and connecting Australians as our industry recovers from COVID and gets ready to take on the world,” said Murphy.