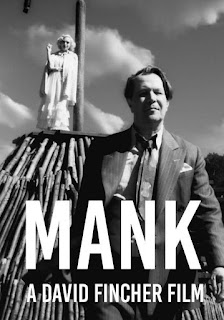 But unlike every critic, I didn’t love it.

I did love a lot of things about it — shot all in black and white, the era, the making of CITIZEN KANE, the process of screenwriting, and there’s a real treat if you’re fans of KHJ radio….

It was too long, if you’re not a real student of Hollywood in the ‘30s and ‘40s, and if you’re under 50 years-old, you will not have any idea who most of these people are and what they’re talking about.  A lot of ideology flies around that deals with things that were topics of the time but don’t directly affect the movie.

The main story centers around Herman Mankiewicz writing CITIZEN KANE — Orson Welles’ brilliant hatchet job of newspaper emperor, William Randolph Hearst.  The problem is that Mank was friends with Hearst and especially his mistress Marion Davies.  So there’s a real conflict of interests.  And the making of the movie is sure to be fraught with controversy.   Does he walk away from the project?   That’s the big dilemma.   It didn’t need 2 hours and 10 minutes to resolve that.

And now I’m going to really spit on the cross.  I don’t think Gary Oldman is right for the part.  Blasphemy you say (even if you haven’t seen the movie)!  Oldman is a great actor, morphs into any part he takes.  He was brilliant as Churchill, awesome as Commissioner Gordon.  I admire his work greatly.  But the key character trait of Mank was that he was wickedly funny.  His one-liners, his droll zingers, and pithy remarks supposedly put even the premier wits of the day to shame.   And I’m sorry, but Gary Oldman is not funny.  He delivers the lines (which on paper could have been funnier on the whole) with his usual precision, but I just didn’t buy that this guy had the twinkle, the razor-sharp comic mind that made him Hollywood’s darling for five minutes, and the hit of any party.

All the other aspects of Mank’s character — his brashness, intelligence, battle with alcohol, self-destructive tendencies all came through with clarity and finesse.   But research, make-up, accents, and prosthetics can’t make you funny (unless the prosthetics is a chicken suit).

Now, this may just be me.  In fairness, critics have called MANK (directed by David Fincher) a beautiful textured film, a masterwork study of Old Hollywood, a glowing metaphor for I-don’t-know-what.  Oscars all around!  And I’m glad movies like this are still being made.  Major studios have long abandoned character studies for superheroes and animated sequels.  But if you see MANK, and I still recommend that you do, and you don’t absolutely love it, just know you’re not the only one.