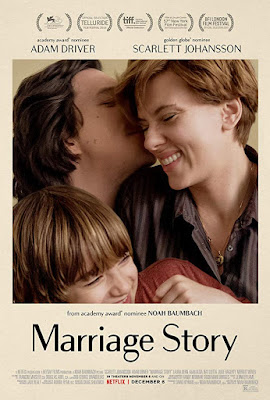 Marriage Story on Netflix, as you likely already know, is a divorce story, more specifically, a story of a couple who pretty much love each other, and have a son, splitting up.  In that sense, it’s pretty much an old story, one we’ve seen on the screen many times, but it’s lifted by strong acting from Adam Driver (just seen in Star Wars) as Charlie and Scarlett Johansson as Nicole, witty dialogue, and some primo scenes.

My favorite was Charlie and Nicole screaming at each other about why they split up, both brought to tears by the knowledge they already knew that they still loved each, and frustrated beyond belief that this had happened to them.  So, why did it happen?  That’s the story of this Marriage Story.

It’s actually a little more Nicole’s than Charlie’s story, since she initiated the break-up.  She couldn’t abide her creative life being subsumed by Charlie’s, something he was for the most part blissfully unaware of.  I guess to make her leaving more believable and better motivated, he does sleep with another woman – though only “once,” as he would and does tell us, and Nicole as well.

But the deeper story is how can two creative people have a life together?  This was explored beautifully in A Star Is Born, more than once, four times, to be exact, but that was a special case of marriage of an aging star and a rising starlet (or singer), which story very different than Marriage Story, where Charlie is only a bit ahead of Nicole in his success.  So maybe Marriage Story can be best understood as a compressed Star Is Born, though likely not.

Driver also does some impressive singing in the movie, of a Stephen Sondheim song no less.  Which raises another point.  There’s a studied hipness in this movie.  But it’s done so well that it doesn’t seem studied.

Anyway, romantic that I am, I would’ve liked to have seen the two together at end, and who knows, since this isn’t A Star Is Born, that could actually happen, notwithstanding Nicole’s boring boyfriend.