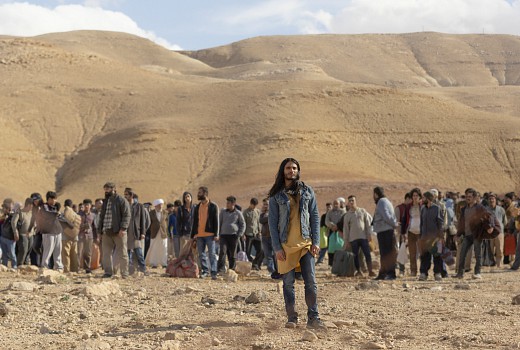 I can’t help but wonder if Messiah is a response to the rise of Trump and politicians who have amassed fervent followers. Are they really the answer or just complete frauds…?

The premise of this new Netflix drama centres around a charismatic man (Mehdi Dehbi), with fleeting resemblance to Jesus, who emerges in the Middle East and seemingly performs miracles. But while social media explodes the CIA are on the case.

Jude Law’s upcoming New Pope may take an irreverent approach to big religion, but there’s really nothing around that challenges faith.

There are several intersecting threads to this drama from Australian writer Michael Petroni (Queen of the Damned, Till Human Voices Wake Us, The Book Thief, Miracles).

The man who will come to be called Al-Masih emerges when ISIL is bearing down on Damascus in Syria. While he tries to convince a fearful throng that salvation is at hand a terrifying sandstorm overwhelms the city and cripples ISIL vehicles. Footage instantly goes viral of the defiant man offering hope and he soon amasses 2000 followers, that’s real not online.

This attracts the attention of CIA officer Eva Geller (Michelle Monaghan) who is keen to get to the bottom of his credibility and thwart any unnecessary movement. But she is also battling an illness which will doubtless become her Achilles heel…

When Al-Masih leads his flock blindly to the border, Israeli intelligence officer (Tomer Sisley) enters the scene, questioning the arrested man. Juggling his own family problems, he is shocked when Al-Masih seems to know much about his personal life. Does he have a higher power?

By episode two another subplot is introduced when struggling Texas preacher (John Ortiz) is considering drastic action and  daughter Rebecca (Stefania LaVie Owen) is about to flee her smalltown woes. Aussie Wil Traval also surfaces as FBI agent, complete with a Southern drawl.

There’s also a young Palestinian refugee Jibril (Sayyid El Alami) who we keep hearing will be required to undertake a pivotal role as part of God’s plan….

These threads weigh things down heavily and more focus would be welcome. But Messiah is otherwise rather Homeland in tone. Scenes are filmed in Jordan and New Mexico with subtitles added for foreign languages. There’s an ongoing tension around Middle East conflict with an American determined to take charge. But unlike the terrorist drama, this provokes questions of faith. Even the promotion for the show asks “Will he CONvert you?”

Having viewed several episodes I’m intrigued as to where this is headed, but nervous about whether it will offer a payoff or leave everything ambiguously in the eye of the beholder.

Mark Burnett and Roma Downey -both of whom produced that dreadful series The Bible– are also producers here… meaning there is probably good reason to tread with caution.

Messiah is now screening on Netflix.