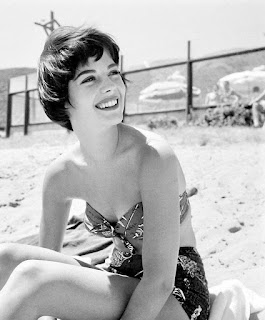 And now for some random thoughts:

I’m starting with a Natalie Wood photo since I haven’t posted one in a long time, and I particularly like this one.

Way more people watched the NFL Draft than the Oscars.  What does that tell ya?

Bill Gates’ wife filed for divorce.  I wonder if she had a chip implanted in his head and found out something.

There’s a great article in THE NEW YORKER magazine profiling SIMPSONS’ writer, John Swartzwelder.  He rarely gives interviews so this is a treat.  I don’t know him that well, met him a few times when David Isaacs and I were writing for THE SIMPSONS, but he’s a good guy and one of the funniest people you’ll ever meet.   Check out the article.

Now that baseball stadiums can only be 20% filled, I hear it’s a GREAT time to go to a ballgame.  No crowds, easy in and out parking, no long lines at the concession stands.  Swear at a player and he might actually hear you.

If only the games themselves were better.  Again this year a ridiculous amount of strike outs and home runs.

When ESPN does a stat cast game, tune in.  Jason Benetti (the next Vin Scully) calls a great game.  And you’re not bludgeoned with stats.  Just enough to enhance the game.  From time to time they slip in a stat cast game on ESPN2 when ESPN has the regular Sunday Night Baseball Game.  Watch the stat cast version.  Oh, and it means no A-Rod.

Netflix recommendation:  BORGEN.   A political show out of Denmark that is wonderful.

Goofy recommendation:  (I believe it’s on the YouTube Channel) THE TASKMASTER.   It’s a combination reality competition/comedy show out of the UK.  And it’s so refreshing to hear biting, funny, sarcastic lines without regard to being PC.

Get both shots.  NOW.

And while you’re waiting, two of my Zoom play readings are still available.  I’m very proud of both of them.

And OUR TIME about four young people trying to break into comedy in LA in 1975 starring Eddie Kaye Thomas, Jonah Platt, Laura Schein, and Noah Weisberg.   You can find it here.

Is Liz Cheney the only Republican who hasn’t lost their mind?

Thanks to all my podcast listeners!  I love you guys!  My episode this week centers on things I hate that the rest of the world loves, and I asked if you had any?  I received enough responses that my next episode is your responses.  It’s nice to know there are people out there.

There will be another LAW & ORDER spin-off.  Between L&O, NCIS, and Chicago-whatever, they must account for 70% of primetime network programming.  Oh, and a CSI sequel is also on tap.  HBO should do that.  SOPRANOS: KANSAS.