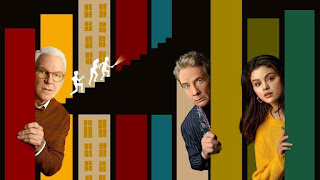 I get asked a lot about what I think of ONLY MURDERS IN THE BUILDING.  It stars Steve Martin, Martin Short, and Selena Gomez and is currently running on Hulu.

The short answer is I like it.  It’s pleasant.  It’s a nice diversion.  It’s well-mounted.  Looks great.  Love the opening titles. And there is an occasional chuckle along the way.  I’ve watched every episode and will continue to do so.  So it’s good.

But I don’t love it.

I feel it could be funnier.  And it feels like there’s a lot of padding.  I wish the story would move faster.  I wouldn’t mind if it slows down to do some hilarious scene, but so far that hasn’t been the case.

I just get the sense that Steve Martin is holding back.  I see opportunities like he and Martin Short going to Sting’s apartment suspecting he’s the killer.  I thought, okay, this could be hysterical.  It wasn’t.  It was mildly amusing.  And I’m frustrated because I know Steve Martin could write funnier (or guide the writers).  So it’s clearly a choice.  Same with a scene with Tina Fey.

I’m not going to get into the plot at all.   I will say Selena Gomez has far exceeded my expectations.

Another issue, and I don’t blame the creative team at all for this one.  Commercials.  They drive me nuts.  Yes, I know I could pay more to have Hulu commercial-free, but you know what?  I’m already paying them.  Netflix doesn’t have commercials.  HBO Max doesn’t have commercials.  Apple + doesn’t have commercials.  So the end result is I rarely watch Hulu.  It has to be a show I really want to see.  And at some point I might just unsubscribe.  I’m currently paying for seven streaming channels.   So if I’m sitting through commercials, the shows better damn well be worth it.  ONLY MURDERS IN THE BUILDING is good.  Is it good enough for four interruptions?   That’s another unsolved question.

What do you guys think?