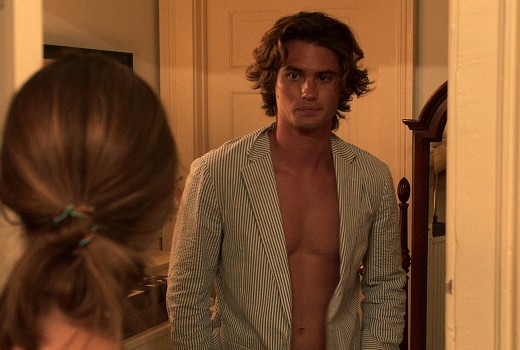 There are hot shirtless dudes, a sexy girl, a bit of surf and a whole lotta mystery in the new Netflix teen drama Outer Banks.

The North Carolina drama is drenched in orange hues, sun-kissed with filters, as it centres around teen pals, nicknamed ‘The Pogues.’

Three guys, chiselled hero John B (Chase Stokes),  bad boy J.J. (Rudy Pankow) and cluey African-American Pope (Jonathan Daviss) all come from ‘The Cut’ aka “the wrong side of the tracks.” Hanging out with them is Kiara (Madison Bailey), who lives in the wealthy part of town.

The Pogues spend a lot of time doin’ not very much until a hurricane hits the town and everything is up-ended.

John B, whose father disappeared mysteriously some time ago, is at risk of being fostered out and ending his wayward adolescence. But when The Pogues stumble upon a sunken boat a mystery to rival The Hardy Boys is triggered.

When none of the very-busy cops believe their story, our quartet take it upon themselves to investigate: using a motel key they find, dodging bullets from baddies in a boat chase, and putting together clues that appear to indicate buried treasure. If only they can get to it first.

In the midst of it all is a question of whom Kiara has affections for, testosterone rivalry with preppy rich boy Topper (Austin North) and unresolved sexual tension with rich gal Sarah (Madelyn Cline).

Chase Stokes, whose character also narrates, exudes TV charisma and it’s surely no coincidence his shirt always manages to stay buttoned up only to his navel. Yet these look like senior teens in much the same way as 90210 kids played down their years on screen to great success.

The mix of action, romance and mystery fits well with the ocean backdrop even if it rarely rises above the level of Supernatural or The OC, but the hand-held cams will try to make it feel more indie.

Both have been long successes. Maybe there’s something to be said for a sincere teen mystery after all.