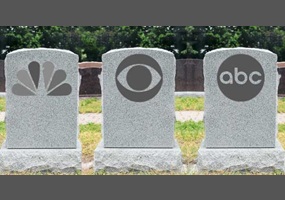 This is rather shocking.  Last Saturday night (January 30th), the four major broadcast networks COMBINED attracted an audience of only 8 million people in primetime.  That is a staggeringly low number.

In the ‘70s CBS used to draw 30 million all by themselves (with shows like ALL IN THE FAMILY, MASH, THE MARY TYLER MOORE SHOW, THE BOB NEWHART SHOW, and THE CAROL BURNETT SHOW).  GOLDEN GIRLS in the ‘80s was bringing in 20 million a week on NBC.

The addition of cable and premium services took enough of a dent into network viewing during this century that networks gave up on Saturday night long ago.  They threw in the towel, programming reruns (from shows aired earlier in the week), cheap news magazines, and reality shows.

And Fridays are heading in that direction.  Wrestling, reality shows, and more news magazines.

Face it, networks are one step away from showing informercials on Friday and Saturday nights.

Broadcast networks, as we’ve known them since the beginning of TV are dead.

Here’s what I predict will happen:  Each of the major networks (with the exception of Fox) are currently owned by a mega- conglomerate.  They all own a streaming services.  Streaming is the future.  Comcast’s main focus will be on Peacock not NBC.  CBS and ABC are set to become respective bastard children too.   Their competition is Netflix, and Hulu, and Apple, and Amazon, and HBO Max, and whoever else I’m missing.  BRIDGERTON has been seen by 80 million on Netflix we’re told.  Four networks combined get a tenth of that.

Stick a (tuning) fork in it.

I think there will be a flip.  Original scripted programming now debuts on the major broadcast networks and then go to their streaming services.  Very soon it will be the other way around.  A new show will premiere on Disney + and then a week later appear on ABC. Broadcast networks will be for the residue, folks that don’t want to pay for additional platforms.   For the Time-Warners and Viacoms they will become an afterthought — a way to pick up some additional change, the way their radio divisions and billboard divisions are.   How long until the Super Bowl is no longer on broadcast TV?

Y’see, here’s why the conglomerates are so excited about streaming:  They can double dip.  Let’s say NBC has the Super Bowl.  On their broadcast network they collect the advertising revenue.  Should they go to Peacock they rake in the ad money AND you’re paying a subscription fee on top of that.   But wait!  There’s more!  The Super Bowl will lure a lot more people to subscribe and THAT’S where the real money is.

8 million people between CBS, NBC, ABC, and Fox for one night?  Hold a mirror up to the body to see if it’s still breathing.