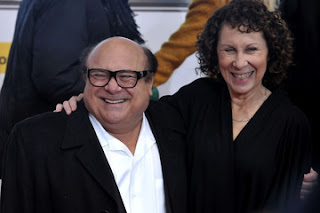 I do this from time to time.  I’ve answered over 3,000 Friday Questions.  It’s one of the most popular features of this blog.  But rarely do readers go way back into the archives.  So occasionally I’ll pull out a FQ post from ten years ago, knowing 99% of you haven’t read it, and the few that have have long forgotten it.  As NBC once said, “If you haven’t seen a rerun it’s new to you.”  So here are Friday Questions from 2011.  Feel free to dive into the archives.  There’s some good stuff buried in there somewhere.

First up is John Trumbull:

I’m doing a caricature of Danny Devito tonight and it got me to wondering: Was there ever any discussion of having Danny guest star on Cheers? Considering that he’s Rhea Perlman’s husband in real life, it seems kind of strange that he never even did a cameo in all the years that the show was on.

There was some talk about it the first season but nothing really serious. At one point we thought of including Danny in the Superbowl scene as a lark but ultimately it was decided the objective of the scene was to promote CHEERS and it would just confuse people with TAXI. Were they watching Louie & Zena?

But if you listen carefully, you can hear Danny laughing offstage. He was there when we filmed it.

The first season of CHEERS proved to be the final season of TAXI, and Danny went off to have a hugely successful feature career. I once said to him, “Now that you’re a big star, I hope you won’t forget us little people.”

Here’s a different Netflix question – When I click to stream an episode you wrote, does any money filter your way? If not, is that because of the age of the show, or because the writer’s strike didn’t quite accomplish its goal?

We’re supposed to see some tiny fraction of money. And I’m sure we will because the studios are dedicated to making sure that writers are never screwed.

When someone pitches a show to a network, and one or all of them pass on it … is that show/idea for a show dead forever? That is, can that same person come back next year, with tweaks and changes but the same basic idea to pitch to the same networks?

You can but you already have two strikes against you. But sometimes network agendas change. One year they’re looking for urban buddy comedies and you pitch a rural family comedy. They pass but the next year they’re looking for rural family comedies. So you run back in only to learn they bought the exact same idea from someone else three days before.

There are instances where a network will pass on your idea and then during the course of the season decide they really want to be in business with you. So they invite you in and ask what you’ve got. You say all you have is the idea you pitched last year. Suddenly they love it and buy it.

I also find if you wait long enough (two years) you can sometimes re-pitch an idea because the entire development department has turned over. Note: this isn’t true at CBS. Wendi and Julie and that group has been there quite some time now. And to their extreme credit, if they decide months after passing on your idea that now it makes sense for them they will call you back in.

We once wrote a pilot for FOX that was ultimately passed on because they said it felt too much like an NBC project. A couple of years later, one of the development people at FOX during that time moved over to NBC and remembered the project. It was a better fit for NBC and she bought the project. That’s really the perfect scenario.  The late great Jerry Belson wrote the movie SMILE and it was later turned into a Broadway musical.  In his Playbill bio he wrote, “SMILE fulfills a lifelong dream for Mr. Belson — to be paid twice for the same script”.

Do writing teams get paid half as much as solo writers? (I.e. A normal writing salary halved?) And could having a partner work against you if you’re both going to cost more than a single writer?

In terms of scripts, yes. You split the fee. Unless you rise to a position where you can negotiate a fee beyond that. Same with producing. But in those cases you usually do negotiate the terms. Showrunners rarely work for scale.

Splitting money is certainly a downside to partnerships. However, I always felt that half of something was worth more than a lot of nothing. I don’t think my career would have been as successful if I weren’t partnered with David Isaacs. So it’s a trade off. But that’s my situation. Yours may be different.

One good thing about splitting money – in today’s marketplace teams are more coveted because shows can get two writers for the price of roughly one. So you might make less but at least you get the job.

There are many instances of partnerships breaking up after they’ve reached a certain level of success and can each carve out a good career on their own.

I think the key to maintaining a good partnership is that there is enough flexibility in the relationship that each member is free to take projects on their own as well as together. For instance, I branched out into directing and sportscasting. David is now a tenured professor at USC. Hey, it just occurred to me, his side profession is way more prestigious than mine. That bastard!