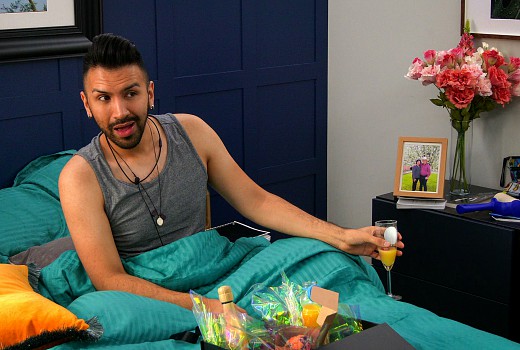 Message. Listen up children. All you fierce Snapchatters and Insta-celebs will be thiiiiirsty when you Netflix and chill with The Circle. Exclamation mark. Hashtag dank. Emoji happy face love eyes. Send.

Message. Is this a cross between a dating app, a chess game and living under house arrest. Question mark, question mark. Hella yeah. Exclamation mark. Hashtag rats in a box. It’s also the most anti-social show ever. Emoji mind blown. Send.

Ok so now that you’re up to speed on how the participants of The Circle will interact, let’s break it down….

When Big Brother was announced as returning for Australia, a number of readers suggested a network should have opted for The Circle, a new UK reality format in which players live alone in an apartment block and only engage via social media, in their quest to win a cash prize.

In this US adaptation, 8 residents are cut off physically from each other, and it seems the rest of the world. Cameras capture their every move, including a Rear Window-style voyeur cam outside the building.

Dysfunctionally glued to their voice-activated TV screen for Alerts, Challenges, Group Chats, Private Chats and more, they form alliances and vote out the most unpopular resident. The tribe has spoken.

Narrator Michelle Buteau adopts a humorous style which is a little extraneous given these mostly 20-something Americans can’t help but self-narrate and OMG every step of the way.

They include a flamboyant gay Christian who has “god-fidence”, a NY bartender and self-declared De Niro lookalike “I’m f***ing awesome”, a lingerie & swimsuit model “I’m not always sexy 24/7”, a pro basketballer “I do stuff with my head rather than my penis”, and an Indian American VR designer who rejects social media “You can be yourself.”

At its purest the show tests how we judge one another, whether you can be appreciated for being your true self, whether you need to tell white lies to conceal your shortcoming or whether outright deception wins the day. Yes in this game you can have a fake profile where everything you say is phony AF.

There are at least two participants who plan on winning with fake profiles and who try to catfish their castmates. Boom, ‘dat’s gameplay right ‘dere. Send.

Flirting consumes much of the interaction, whether as real or fake personalities. Everybody frames their responses in a way that appears sincere whilst actually playing strategically. But holed up in a box, small things become magnified. Information is key and there’s much paranoia and analysis around what somebody might be feeling based on a sent message, and how they can be manipulated further. All of this happens without understanding they themselves are being manipulated, either by other players, producers or both.

Indeed The Circle is manipulation of the highest order, with a generation desperate to be liked and documented in photos-or-it-didn’t-happen. People are rated on the slimmest of truthful information, like something cruelly Orwellian or possibly of an episode of Black Mirror.

Yet it also looks like it would be great fun to play. So is it fun to watch?

This cast is diverse but not always likeable (which is ok if they are interesting)…. points to the anti-social media participant Shubham. However aside from being highly claustrophobic, the show’s constant “Message. Write down my response, add punctuation. Send” / Analysis of Message by Recipient is very repetitive as storytelling. I did wish someone would knock on a door or pick up a phone, but that would break the rules in ways we haven’t seen since turkey slappin’. I guess such descriptive storytelling does make it ideal for a blind and vision impaired audience….

That said, just as I was feeling my grasp on brain cells fading, it introduced a new twist… such as “influencer power” or the first eliminated person about to come face with one who had voted them off. Then it’s just outright evil fun.

As a format this gets top marks for originality and definitely for audaciousness. As a viewing experience I’m torn because the conflict is so compartmentalised. This is tell-not-show TV and the experience is so singular it belies what we feel about drama and characters and refuses to apologise for it.

So while The Circle will possibly polarise into viewers into Love / Hate camps, I’m so conflicted I’m consequently landing in the middle. No question this will trend with YA viewers bigtime, become watercooler talk (do the kids even have watercoolers? anymore) and an Australian version is surely a matter of time.

I’m optimistic enough to hope the winner is the person who actually remained true to themselves, but fear I will be proven wrong.

If it goes to a catfish player then society has gone to hell in a handbasket. Hashtag maybe that’s the point question mark send.