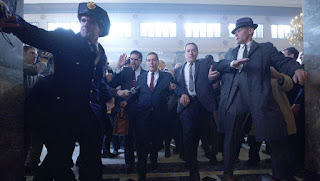 A writer friend summed up THE IRISHMAN perfectly. He said you could take an hour-fifteen out of this movie – ANY hour-fifteen.

THE IRISHMAN is a meticulously crafted, well-acted, beautifully directed incredibly indulgent film about horrible people, not only doing horrible things, but horrible things we’ve seen already fifteen times in Martin Scorsese’s other movies. I know I frequently complain that movies are too long. This one is 3:39.

Not enough happens. De Niro and Pacino both do a medley of their greatest hits. CGI is employed to make them look young and at times De Niro appears almost Asian.

There are scenes of people taking a smoke break. Several of them.

That’s why it didn’t win any Oscars.

What could possibly have been left out on the cutting room floor? If smoke break scenes made the cut, what (if anything) did Scorsese leave out?

Along the way there were some excellent scenes and moments but not a compelling enough story to warrant the time it takes to fly from LA to Detroit. Joe Pesci and Ray Romano were standouts.  And the guy playing singer Jerry Vale.

And then there’s my own, I acknowledge, personal issue with the film. Every main character in THE IRISHMAN is despicable. Tony Soprano without the therapy. And the only reason we give a scintilla of a shit about them is because wonderful actors are playing them.

So what happens in fifty years? Might there be a movie about Trump and his treasonous inner circle of gangsters? Will audiences have sympathy for Donald Trump and Stephen Miller and Rudy Giuliani if our national treasure actors-of-the-day portray them? Will future movie-goers (and who knows where they go in 2070?) be fooled into finding these monsters “fascinating?” The real people are fooling millions, imagine what good actors can do.  So for that reason I had a harder time caring for one second about any of the thugs in THE IRISHMAN.

If, out of curiosity, you do want to watch THE IRISHMAN (it’s on Netflix, it’s free and available any time), my suggestion is to do it in two parts. Start in the late afternoon. Break around 6 for dinner, and return for the last two hours. And bring your laptop. I guarantee you’re going to be checking email and Instagram — at least 339 times.
Source: Ken Levine