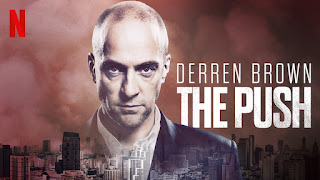 There’s a fascinating special on Netflix that’s called THE PUSH. Now be careful because there are two shows on Netflix called THE PUSH. The other has to do with a snowboarder or something. I watched the first five minutes of that and thought, “this can’t be about human manipulation.”

So turning to the other PUSH:

The mastermind is Derren Brown who is described as an English mentalist, illusionist, and author. Through the power of suggestion and our need to conform to society he gets unsuspecting people to do unimaginable things. In THE PUSH the goal is to get someone to push a person off a roof to their death – in other words, commit murder. And do this within one hour.

The ruse is very elaborate, requires lots of actors, ingenious pre-planning, and carefully orchestrated steps to mold the subject’s behavior and bring him to the brink where he would push someone off a roof. You say people can’t be that gullible but look at who’s president.

It’s almost like a sting-type movie or the brilliant British series, HUSTLE, about sophisticated con artists pulling off spectacular heists (like stealing the Crown Jewels).

THE PUSH is an amazing (and frightening) study of human behavior, but what struck me is this what comedy writers often do. When characters get out of their comfort zones and all reasonable options are cut off, they do crazy (and hopefully hilarious) things.

Comedy writers are sadists. We find a character’s weakness then put him a pressure situation and just keep tightening the vice. We heap on more and more things to keep him off-balanced. Two great examples of this are the movies THE OUT OF TOWNERS (the original version) and TRAINS, PLANES, AND AUTOMOBILES. Everything that can go wrong, SHOULD.

Farces are built on this. A character must lie to preserve some dire secret. But circumstances prevail that complicate the situation. So the lies increase, and the complications expand, the stakes get even higher, and characters wind up saying and doing things they never would, often with comic results.

THE PUSH is worth seeing for its psychology, and if you’re a writer, a great example of how to structure a comic story and work out your anger issues.
Source: kenlevine.blogspot.com