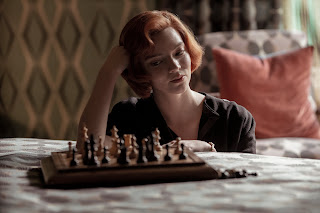 When I posted my review of THE QUEEN’S GAMBIT back in November I said I would circle back to the problems I had with it once more people had a chance to see it.  So have you???

Mostly I loved the series.  But I did have a couple of issues.  So with that in mind…

One minor and one major quibble.  Minor:  I was thrown that the series was set in Kentucky.  I’ve spent a good deal of time in Kentucky — around that period.  And it’s the South.  You hear accents there.  If it were set in Indiana, or Illinois, or Upstate New York I wouldn’t be bothered at all, but I felt they really missed the flavor and distinctiveness of Kentucky.

Now my major issue:  And this stems from my writer’s background — all of Beth’s problems were solved easily and usually by other people or convenient outside forces.  If she needed money, people would swoop in to provide it.  If she needed strategy support, all of her fellow chess whizzes would converge to provide it (even if they been on bad terms with her).  Angels in her life always showed up at just the right time.  Her ex-classmate, the gay guy she had a crush on — they could have called the series “You’ve Got a Friend.”

When the Russian chess masters were plotting against her, they did it in her hotel, down the hall from her room, with the door to their room open.  And Beth happened to pass by at just the right moment to eavesdrop.

Personal taste, I prefer when characters actively solve their own problems.  Or at least taking those steps.  That’s one of the reasons why I love LUPIN on Netflix.  It’s great fun watching him ingeniously wriggle out of seemingly impossible situations.   I just think it makes for better storytelling.

I never read the QUEEN’S GAMBIT book.  Maybe all of those moves are in there and the series is just being faithful to the material.  And like I said, for the most part I loved the series, but that aspect bugged me.