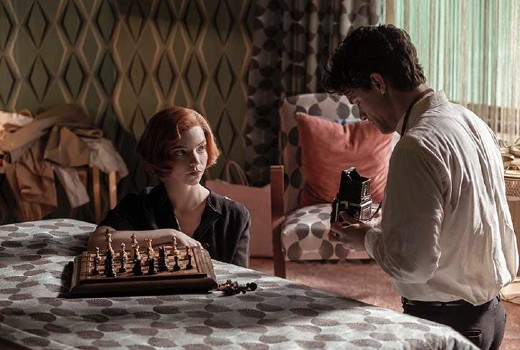 Executive Producer of The Queen’s Gambit, William Horberg was in conversation with film critic Luke Buckmaster last week as part of the Screen Forever conference.

Amongst the questions he was asked, “How do you make chess come alive on screen?”

“Well, I am going to push back and say, I don’t think it is really about chess,” Horberg said.

“It is about this character, a very, very unique character, Beth Harmon that Walter Tevis created. She is a genius, she is a nerd, she is sexy, she is a killer, she is shy. She was just so fascinating and embodied so many contradictions.

“There is also the underdog sports narrative that is part of the story, of the girl growing up and winning the world championship.

“I think what really made this something that connected to audiences all over the world was the emotional journey of Beth as an orphan, someone who came from such a dark place in terms of her childhood. And who overcame a lot of obstacles in terms of her own concern about her sanity, her own loneliness, her own battle with her demons and addictions.

“I think the limited series format is what really allowed us to do a deep dive into the character and do not have this produced sports movie.

“A lot of work went into making the chess cinematic – the visuals varied and exciting. We were just so terrified about how the heck we would do this.”

He elaborated on how the games were visualised into the narrative.

“A lot of work went into thinking about the chess games, really starting with the script. You know, Scott knew that he would have to find a way to make the emotional stakes, not just about watching people move the pieces around the board,” he said.

“It was about the context of each scene, where she was out in her life and what she wanted, what she needed. So, there were probably a lot more matches in the novel. We pick the ones that we felt had to be a part of, looking at it from a point of view of her character’s dramatic arc.

“With that in mind, once it came to making the show, we spent a lot of time with chess consultants. We really wanted to get every aspect of that authentic. Not that the chess audience was going to be the biggest audience in the world, but we knew we had to pass the smell test with those people. We wanted to show them how much we respected the game in terms of the care that went in.

“We wanted to show that that was important to us. We had Gary Karpov, one of the greatest chess players in history. He was reading the scripts and talking to Scott. And we had him and Bruce Pandolfini helping us design the matches to help us service the story. Scott is a storyteller.

“The pieces on the ceiling is something that is in the novel but how that is going to look and how to do that and how to realise that as an organic element of the show was a long, long process of trial and error. We had a fantastic visual effects supervisor, John Mangia on the show.

“It was one of the last things to lock in deep in postproduction. There was just so many elements to get it right. How big are they, how dense are they, how transparent are they, how is it lit, how is the camera moving? The film, the relationship between the character and the board? How do those pieces move? What sound do they make?

“It was a great moment when we got it right. The studio gave us a lot of rope to hang ourselves with. When we found it, it is poetry, I would say.”

The Queen’s Gambit screens on Netflix.