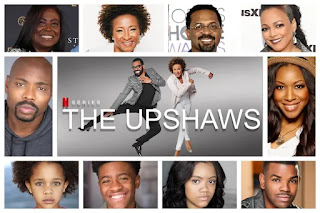 THE UPSHAWS is a funny show.  And full disclosure: I say that not just because my daughter and her husband are writers on the show.  It premiered last week on Netflix and is already their number one show (so maybe I’m not alone).   The New York Times and Entertainment Weekly loved it.  And the Wall Street Journal hated it.  So that’s three solid endorsements.

These days, if you’re going to show a diverse ethnic group, the safe way to go is to make everyone likable and noble.  And that’s great except it’s death for comedy.  THE UPSHAWS is not afraid to present characters with flaws.  And it’s not afraid to have to have characters clash.  This isn’t the COSBY SHOW.

Although THE UPSHAWS is mounted like a retro multi-cam, it somehow seems fresh.  The blended family situation is messy, and I think that’s one of its strengths.  This isn’t GOOD TIMES.  (Full disclosure number two: I never liked GOOD TIMES.  It was preachy, characters spouting statistics, and Jimmie Walker’s catch phrases turned the series into a cartoon.)

Another big plus is THE UPSHAWS cast funny people.  This is the key to all sitcoms.  Hire funny people.  Wanda Sykes kills it.  Mike Epps is very funny (and kudos for allowing his character to be funny at the expense of being “nice.”).  Kim Fields, as always, gets every laugh you give her, and the side characters click too.

The show is loaded with jokes (Imagine!  A comedy that wants you to laugh.) and having been in the audience for one of the episodes, I can tell you the laughs are real.  There are some very sharp lines.

At the same time, it deals with weighty issues as the series unfolds and contains dramatic moments that are earned.

It’s not groundbreaking, but I found it funny with heart.  And okay, yes, the ones written by Annie Levine & Jonathan Emerson were my favorites.