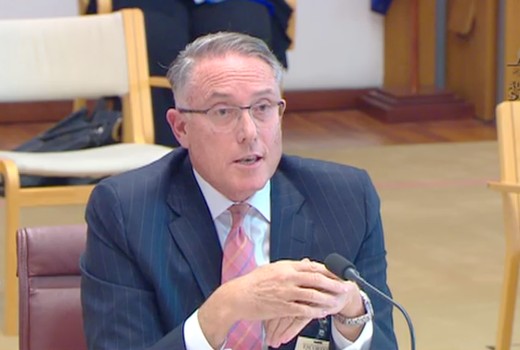 Foxtel yesterday addressed a proposal to drop its Local Drama quota from 10% to 5% by requesting flexibility in its Australian production spend.

But while the Foxtel Group now has 4 million active subscribers across Foxtel / Foxtel Now/ Kayo / Binge earnings have halved between 2014-15 and 2018-19. At the same time it faces increased competition from Streaming platforms including Netflix, Amazon Prime, Disney and Apple TV -none of which have any local content requirements at present.

The 10% of revenue spend applies to predominantly Drama channels including FOX Showcase, BBC First, Movie Channels, and has seen recent titles Wentworth, Secret City, A Place to Call Home, The End and Upright at around $24m a year.

But dropping the quota to 5% of revenue would be a saving of some $12m.

“Our commitment to Australian content is firm,” Foxtel CEO Patrick Delany said yesterday. “But there are more Australian stories and voices than just in Drama. So the ability to move that investment around is absolutely vital in order to be efficient, and be able to compete. There’s not much good in having no Australian media industry in 10 years time, because then there’ll be none of us investing in that.

“Our strong view is that the 5% reduction gives a certainty that we’ll still be producing a couple of dramas a year, at minimum. It gives us in management, reflecting our client’s needs, a flexibility to produce more drama, or alternatively, switch it into other Australian production.”

Last week Tony Burke, Manager of Opposition Business in the House, told Parliament the solution to creating a level playing field for Foxtel was not to drop quotas but to address the lack of them on other Streaming platforms.

Foxtel yesterday maintained revenue from Kayo and Binge are also a “a very small fraction” of revenue and that $30m grants were for under-represented, niche and women’s sports, some of which were available on Kayo Freebies.

Yesterday Patrick Delany pushed for Foxtel flexibility to invest in other genres by reducing Drama quotas from 10% to 5%.

“Our position is that we shouldn’t be regulated,” he said. “Our position is that the level playing field is what we’re after. We need to be able to make decisions to move our investment around in an unbelievably dynamic market. So I’m not sure I’d be comfortable with any quota.

“But in the meantime, what I really appreciate is to try and get flexibility so I can fight the war now for Australian consumers rather than wait another couple of years. This regulation’s been as it was since 1993. It’s 25 years later and nothing’s changed and the world sure has.”

I want to thank the Committee for the opportunity to appear today and provide the Foxtel Group’s perspective on the reforms set out in the Bill.

My comments also reflect the views of ASTRA, of which I am the current chair.

The Bill contemplates two significant changes for our sector.

• First, a reduction in the new eligible drama obligation from 10% to 5%, and
• Second, the relocation of the subscription television captioning rules from the Broadcasting Services Act into a disallowable Ministerial instrument.

By way of background, the Foxtel Group is one of Australia’s most dynamic media companies. We directly employ around 2,000 people. And for every person we employ, a further three people are employed in the media industry.

We deliver local television and streaming services to almost four million active subscribers in regional and metropolitan areas of Australia.

Our services include the Foxtel set-top and its streaming sister, Foxtel Now. We also have two fast-growing streaming services, Kayo Sports and BINGE, which now account for nearly half of our customers.

Our business model is very different to free-to-air television. We are a discretionary service that our subscribers’ must value enough to pay for.

We also one of a handful of local players competing with global streaming giants in a very crowded marketplace.

Our customers expect choice in movies, drama, lifestyle, documentaries, and news from Australia and around the world.

We deliver our services through cable, satellite, and the internet. We do not use public resources, for example, the spectrum used by free-to-air television.

While this is a very dynamic industry, some things remain constant.

The Foxtel Group is a committed local champion for Australian stories and voices in all genres – drama, lifestyle, factual, sports and news.

Our Australian drama productions are renowned and include Wentworth, Love my Way, Deadline Gallipoli, Secret City, A Place to Call Home and more recently, The End and The Upright.

Our investment in Australian stories and voices in other genres reflects the tastes and interests of our customers. Like drama, those investments also create valuable Australian jobs in the creative industries.

In fact, over the past five years, Foxtel has spent 30% more on Australian factual, lifestyle and entertainment programming than programming that qualifies as eligible drama.

We understand the concerns that have been expressed in submissions to this Committee about the importance of the local creative industry.

However, we do not believe that the current 10% obligation, an obligation that applies only to Foxtel, is the right way of addressing that concern.

Our industry in Australia has been significantly impacted by competition from unregulated global streaming services such as Netflix, Amazon Prime and Disney+.

Given the massive shifts in the competitive landscape, we do not believe the current regulatory environment for Foxtel is sustainable. That is not good for any Australian who believes in the importance of local media companies.

We believe regulation needs to be modernized to establish new settings that allow competitive local champions to succeed.

Our record in both regulated and non-regulated content speaks for itself.

However, we believe there are better ways to achieve public policy aims that directly support Australia’s creative sector. For example, the Government has recently released draft legislation to change to the Producer Offset scheme to assist the production industry.

The proposed 5% drama obligation does not mean that Australian audiences will see fewer Australian stories and voices represented on our screens.

It simply provides us with the commercial flexibility to invest in genres and formats that respond to viewers tastes. So, for us, this is a significant and overdue reform.

Finally, in relation to captioning, the change proposed does not affect Foxtel’s investment in supporting our hearing-impaired customers, and I refer Committee members to our submission.