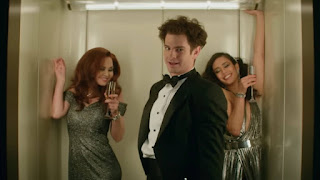 When Mike Nichols was finishing up his splashy anti-war movie, CATCH-22, the movie version of MASH came out.  Nichols saw it and essentially said, “Shit! That movie did everything I tried to do but way better.”   Steven Spielberg’s glittery remake of WEST SIDE STORY comes out this season.  I wonder if he saw TICK TICK… BOOM and said the same thing.

TICK TICK… BOOM is quite simply the best movie of the year — I don’t care how many Princess Diana rehashes come out.  Unlike a lot of critics, I’m not going to bore you with seven paragraphs of “major triumph!” “towering achievement!” “best film Lin Manual-Miranda has ever directed!” (it’s his first).

Just know it’s all of those things and more.  The story, the storytelling, the visuals, the music, and even a cameo by Chita Rivera (that must piss off Spielberg too) —  TICK TICK… BOOM delivers on every front.   (Note:  there are tons of cameos of Broadway notables.)

Lin Manual-Miranda appear to be brilliant in everything he attempts.  For this project he was clearly influenced (heavily) by Bob Fosse’s ALL THAT JAZZ.  The same quick cutting, constant motion, visually exciting presentation.  And all for a purpose — to really put you into that world and lose yourself in the emotional depth of the journey.

If you’re not familiar with the story, it’s about Jonathan Larson, who wrote RENT but tragically died of an aortic dissection at 35 the night before it was to open off-Broadway.  Prior to that, Larson had spent eight years working on a sci-fi musical that went nowhere, and a one-man show about that experience and his struggles that he performed himself called TICK TICK…BOOM.   The movie opens up the one-man show by dramatizing events, showing flashbacks, and creating imaginative glorious production numbers.

The movie was written by Steven Levenson.  TICK TICK… BOOM is the best film musical in years.  Ironically, Levenson also wrote maybe the worst film musical in decades — DEAR EVAN HANSEN.  From the cellar to the penthouse in one year.  (Says something about the director’s vision, doesn’t it?)

You might think TICK TICK…BOOM is just for Broadway and theatre nerds.  You would be wrong.  I loved this movie and I didn’t like RENT.  It’s for everyone.    If you read this blog you’re probably interested in the creative process whether you’re in entertainment or not.  Well, this movie deals with the creative process in spades.

It’s playing in select theaters and Netflix.  Don’t watch it on your phone.

On to WEST SIDE STORY.  I plan on watching with an open mind even though there’s no Natalie Wood in this version.  Will it be another TICK TICK…BOOM or IN THE HEIGHTS?   In the meantime, I think I’ll watch ALL THAT JAZZ again.