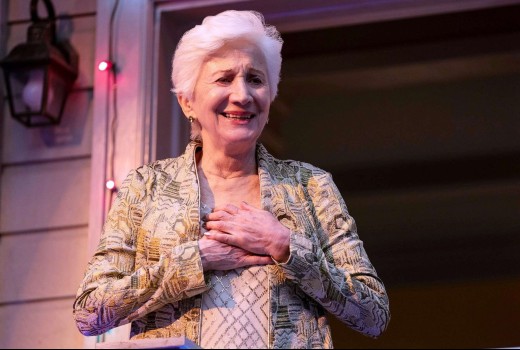 Veteran US actress Olympia Dukakis, best known for Tales of the City, Moonstruck and Steel Magnolias, has died, aged 89.

Her brother, Apollo Dukakis announced her death in a Facebook post, writing: “My beloved sister, Olympia Dukakis, passed away this morning in New York City. After many months of failing health she is finally at peace and with her Louis.”

The actress was 56 when she came to prominence thanks to her Oscar-winning turn in Moonstruck, in which she played the mother of Cher’s character.

Her first experience on Broadway was as an understudy in 1962’s The Aspern Papers with many stage roles to follow.

She made her television debut in 1962 on an episode of The Doctors and the Nurses, also guesting on Dr. Kildare the same year.

There were early often uncredited roles in films including Death Wish but by 1969’s John and Mary, she played the mother of Dustin Hoffman’s character, followed by 1971’s Made for Each Other.

Other film credits include The Rehearsal, The Wanderers, The Idolmaker, Working Girl, Look Who’s Talking, Steel Magnolias, The Cemetery Club, Mighty Aphrodite, Mr. Holland’s Opus, Jeffrey, Jerusalem, The Thing About My Folks, The Great New Wonderful, Away From Her, In the Land of Women, Cloudburst.

In 1992 she starred as Sigrid Thornton’s mother in the box office flop Over the Hill, directed by George T. Miller.

Dukakis also did television work, most notably as matriarch Anna Madrigal in Armistead Maupin’s Tales of the City, including the most recent revival on Netflix plus The Last of the Blonde Bombshells, Center of the Universe, Frasier, The Simpsons, Numbers, Law & Order: SVU, Bored to Death.

Olympia Dukakis Was an Amazing,Academy Award Winning Actress.Olympia Played My Mom In Moonstruck,& Even Though Her Part was
That Of a Suffering Wife, We

ALL The Time.She Would Tell Me How MUCH She Loved Louis,Her”Handsome Talented,Husband”.I Talked To Her 3Wks Ago. Rip Dear One pic.twitter.com/RcCZaeKFmz

Oh my.. Olympia Dukakis has passed away.. She will forever be young in my mind and be my loving movie mother. When will I learn that people do not live forever & the time to engage is NOW?.. RIP pic.twitter.com/TNWwcjFfu0

RIP Olympia Dukakis…the consummate actor. You made all around you step up their game. A joy to work with. Rest well. "May flights of angels sing thee to thy rest".

Olympia Dukakis has departed our company. We were Moonstruck by her, as she told us great Tales of the City. A true Steel Magnolia within a more common forest. Ah, what a life force, her later years her best. Rest now among the heavens, Olympia.

So sad to hear of the passing of the wonderful Olympia Dukakis.

My very first day on “Search for Tomorrow” in 1983 was a scene with her & Jennifer Gatti. RIP, great lady!