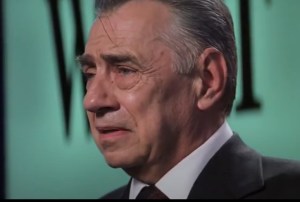 He died on Sunday surrounded by loved ones in California.

Holly Wolfle Hall, the actor’s wife of nearly 40 years, said “His voice at the end was still just as powerful.”

My neighbor, friend, and one of the wisest, most talented and kindest people I’ve ever met, Philip Baker Hall, died peacefully last night. He was surrounded by loved ones. The world has an empty space in it. pic.twitter.com/pBCaILjHPT

In 1991 Hall played Lieutenant Joe Bookman, the library investigator who comes after Seinfeld for a years-overdue copy of Tropic of Cancer, telling Seinfeld: “Well, I got a flash for ya, Joy-boy: Party time is over.”

He was brought back for the Seinfeld finale and by Larry David on Curb Your Enthusiasm. He played neighbour Walt Kleezak on Modern Family.

Hall initially devoted himself more to theatre than TV and movies but a Paul Thomas Anderson short film Cigarettes & Coffee changed all that.

His final credit was Netflix drama Messiah written by Aussie Michael Petron in 2020.