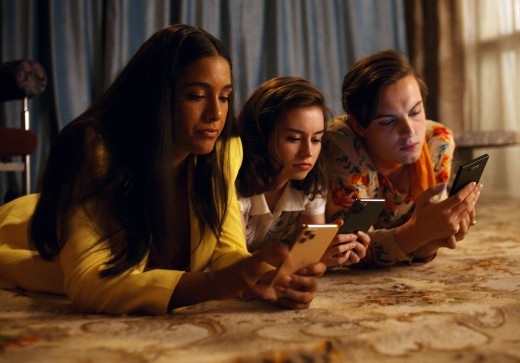 Back in 2011 ABC2 screened a local indie-produced comedy, twentysomething, in which creators Jess Harris and Josh Schmidt played unemployed housemates who decided to become their own bosses in an array of short-lived business schemes.

10 years later the same channel (currently rebranded as ABC TV Plus) unveils Why Are You Like This, another indie comedy in which friends and housemates juggle unemployment, friendships and identity politics.

Naomi Higgins (Get Krackin’) is co-creator and one of three lead performers, joining Olivia Junkeer and Wil King. These twentysomethings may not necessarily be likeable, but nor are they trying to be. They are certainly forthright in a desire to be heard an unapologetic in a world of cancel culture and political correctness.

In the opening episode Mia (Junkeer) uses her Asian traditions as an excuse for questionable office behaviour, but is happy to take a severance pay and chill. Meanwhile friend Mia (Higgins) attempts to excite her male colleagues with a staff presentation on RU OK Day? with little success. But the day is salvaged by a visit to see housemate Austin (King) performing in drag as Jon-Benet RamsMe at a local gay club.

In episode two Penny empowers oppressed women in a male-dominated client office while Austin helps Mia to dislodge a menstrual cup which has become embarrassingly stuck in… well, I’ll just call that a spoiler and stop that thought there.

Yes, Why Are You Like This (sans question mark) is in-your-face, unapologetic and pitching to be “the filthiest thing that’s ever been on Australian TV” -Doug Mulray, take note. It doesn’t necessarily achieve the latter in the two episodes viewed, but there’s still time.

The three lead performers barge onto screen with -as the saying goes- more front than Myers. That may not make them especially endearing, but you wouldn’t tackle a premise of this nature with anything less. The script, by Higgins, Humyara Mahbub and Aunty Donna’s Mark Samual Bonanno, toys with racial profiling, misogyny, homophobia, vanity, and an inability to navigate everything in between. It also highlights Gen Z perspectives which few other scripted shows get the chance to dramatise. That may not make it to everybody’s liking, but be prepared to admit you’re just not cool enough.

Dramatically I was a little unclear on just what these characters wanted -acceptance, money, understanding, sex or just more time to sleep in and eat the latest baos? The title feels deliberately ambiguous: why are they like this / why is everybody else like this….?

Why Are You Like This began live as a Fresh Blood pilot so it’s great to see it undertake a longer form as it fleshes out its anarchic comic voice.

8:45pm Tuesday on ABC TV Plus (later this year on Netflix).