In 1986, my writing partner, David Isaacs and I took a rewrite assignment for 20th Century Fox. We did a polish on a movie that never ultimately got made. (What a unique story that is in Hollywood.) But we were given an office and writers assistant on the 20th lot.

At one time at that studio we were in a gorgeous Swiss Chalet. Now we were here: 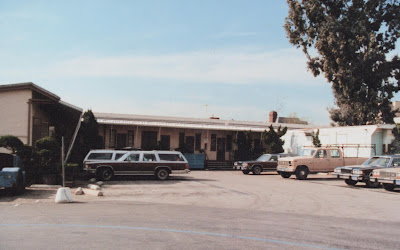 Gives you some idea of where our career was at the time. From a chalet to the Bates Motel.

We had two tiny offices – one for the assistant and one for us. A couch barely fit into ours. Cloak rooms were larger.

And behind us was the editing bay for a new series premiering that fall called LA LAW. For weeks they were assembling the opening titles so we heard five-second snippets of their opening theme 30,000 times. To this day I can’t hear that opening theme without getting PTSD.

But we enjoyed the assignment, it’s always fun to be on a lot, and we liked our no-tell/motel neighbors. They were a young writing team fresh out of USC named Scott Alexander & Larry Karaszewski. They were working on a broad comedy called PROBLEM CHILD. The four of us hung out, went to lunch a few times.

Everyone moves on in Hollywood so off we went (or they went – I forget which) and wished each other well.

They DID well. Among their screenwriting credits are THE PEOPLE VS. LARRY FLYNT, MAN ON THE MOON, BIG EYES, ED WOOD, and the current DOLEMITE IS MY NAME. And this being Tinsel Town, where everyone has lesser credits: PROBLEM CHILD 2, and THAT DARN CAT (which starred the cat we used on ALMOST PERFECT – I hate when actors jump from TV to features).

They also dabbled in television doing the award-winning O.J. SIMPSON TRIAL for FX.

So obviously they’re terrific writers, but the best thing is – they’re the same unassuming nice guys they were back in the Dust Bowl motel. I hope to get them on the podcast later this year.