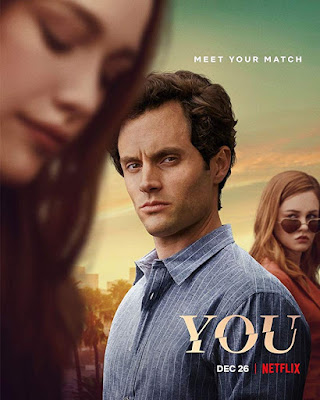 Well, it’s rare that a mystery or thriller surprises me with almost all of its twists, but the second season of You, now streaming on Netflix, did just that.  And with the same wit and style that lit up the first season, maybe even more.  All of which adds up to a highly, often immensely, enjoyable second season of this literate and introspective serial killer.

Joe Goldberg worked in a bookstore in New York City in season one.  Now he’s trying to establish a new identity out in LA.  He employs his time-honored way of making things happen: he locks a guy up in his basement and assumes his identity.  Just before he falls in love with Love.  Well, Joe was already in love with love, certainly obsessed with it. but this Love is Love Quinn, perfectly played by Victoria Pedretti, whom I last noticed in Once Upon a Time in Hollywood.

But she’s just outstanding in You, down to that smile she gives us when she realizes that she’s finally getting Joe to sleep with her.  Her character is complex, to say the least, and I actually liked her even more than Guinevere Beck in the first season, as Joe’s all-consuming passion.

And the plot is brilliant.  Here are some of the surprises I didn’t get:  Joe letting the real Will go – the guy whose identity Joe stole.  The best surprises are well-motivated, and this one was a logical result of Joe wanting to really be a good person, as part of his love for Love.  The cop killing Forty at the end, and, for that matter, Forty figuring out that Joe killed Beck et al back in New York.  Candace’s deployment was not surprising, but very well played.

The one big twist I sort of saw coming – indeed, the biggest twist in the season – was Love killing Delilah, etc.  I put her at the top of the list via process of elimination, behind Love’s parents, all higher as would-be protectors of Joe than Joe himself, which have been too obvious.  And I can’t say I was thrilled by the very very ending, with Joe starting to fantasize about the neighbor we don’t really see.  But, hey, I liked seeing Huxley’s Brave New World among her books, and that’s just entree to the next season.

All of this is brought to life not only by great acting – the scenes with Joe (also perfectly acted, by Penn Badgley) and Love are nonpareil – but sparkling dialogue, mostly from Joe, often interior, as when he grumbles that “this is what I get for trying to out-tech a teenager” (Ellie) or “the robots are not our friends”.  Yeah, though Joe is social media-literate enough, his true talent are words and word-play in the Victorian tradition, and thus he’s often challenged by latest tech, all of which adds to his charm.

And charming might be one of the best words to describe this second killer season.

See also: You: Review from an Unconflicted Fan